“The Bold and the Beautiful” — The Old and the Pitiful

“The Bold and the Beautiful” — The Old and the Pitiful

Look at these three. I’m sure you’ve seen them more than Obama, a relative or even the common housefly over the past year-and-change. Well, any true B&B fan can tell you that there is no end of this trio on any horizon–north, south, east nor west. But the debate among the fans has become similar to today’s political conversation in which Steffy and Hope are the opposing parties and Liam is a waffling President stuck in the middle. I won’t share my political beliefs here, but I will share my stance on this never-ending sudser debacle. I am team Hope, and here’s why.

I’ll have to explain this whole thing from point blank from how I understand it so readers, feel free to correct me. There’s been a rift between the two stepsisters ever since Hope was SORASed (soap opera rapid-aging syndrome) in 2010. Steffy was on a mission to rid the family business, Forrester Creations, of the Logans, who they feel gained control of the company unfairly and were taking it in the wrong direction. While a noble move to get the company back into the family’s hands, taking it away from “Dollar Bill” Spencer, Jr., I also sense an ulterior motive. I feel that Steffy was her grandmother’s work–Steffy had a personal agenda to defeat the Logans.

I am my grandmother’s grandson. I am, tried and true. So why do I view this scenario negatively? It started with an affair. Steffy wins back Forrester by pretending to put the moves on Bill while he’s married to Katie. She does succeed in getting the company back, so good for her. But then Steffy tries to get with Hope’s boyfriend Oliver, including a scene in which Steffy purposely topples a cake on Hope (in addition to other childish pranks with the help of her aunt Pam). She ultimately fails in that mission then she reveals that part of the reason why she has the animosity that she does is because she feels that “her father will stop loving her.” Really?! A grown-ass successful, shrewd 20-something woman feels that threatened by a teenager? If I acted like that with a younger step-brother, much less my kid-aged goddaughters that my mom is a mother-figure to, my 23 year-old ass would be grass! And when I say “grass,” I mean the grass that’s dried up, blowing in the street after the grass has been cut!

Now onto the next major touch-point in this section, if you had not only a major status in your family’s large company as head of PR, but also an even bigger status in the family itself, and someone rigged your tribute video and costs you your job, would you forgive them? I wouldn’t, and nobody I know would either. Steffy goes on to forgive Liam for doing just that and begins to develop feelings for him…while he’s with Hope. Okay. That failed too, so she leaves on a business trip and comes back with eyes for Bill, but this time she means it. It only ended once Katie found out, threw a fit and suffered a heart attack. Fast forward to mid-2011, Liam helps Steffy after she hit her head on the side of her tub. Hope and Liam are engaged, but Hope is also preoccupied with work. Steffy takes it upon herself to comfort Liam and they eventually kiss. Busted! Hope sees this and she calls off the engagement.

Let’s hone it on that. Do you blame Hope? It’s not the same as Brooke and Bill’s recent shenanigans because while it’s inexcusable, Katie made the situation like that. They inadvertently did what Katie, in a weakened state, wanted them to. But for this situation here with Steffy, Hope and Liam, I say shame on Steffy and good on Hope. Hope gave up and rightfully so, but after her confrontations with Steffy, why is it okay for Steffy to trap Hope, who finally wanted to hash it out with Liam, inside a sky lift gondola? Not only that, but this woman comes to the nearby peak in a wedding dress for an impromptu wedding (Liam, like a loser, gives another woman another woman’s ring and Steffy, the other woman, ACCEPTS the secondhand ring) and Liam accepts! No questions! Well, not overtly at least.

There has been endless back and forth with Liam between these two half-women and the main reasons why Liam was repeatedly torn from Hope was because they were never given a fair shot. Bill stuck his dirty fingers in the Jiffy even more than Stephanie did back in the day, going so far as to bail The Deacon out of prison, and Steffy made sure to entrap a stupid Liam into situations that she knew would get Liam in trouble with Hope: on the bed in Italy with the magic iPad that Liam threw in a toddler-like tantrum, the events at the club, sex at this never-before-seen hideaway at Brooke’s house. Hope has been immature too with this constant urge to get married, like, right now and her vandalizing Liam’s house, but anyone who doesn’t have a short memory can’t deny that most of what kept Liam and Hope apart involved Steffy, and not in a favorable way. “Hope living with a married man be damned,” it enraged me like no other when characters on the show, as well as most viewers, were bashing Hope for this technicality while Steffy continues to get off scot-free with worse.

I could list more situations, but it’ll be futile at this point. The real problem is clearly Liam because he thrives off the attention just like his father. But unlike Liam, Bill has a cast-iron backbone. Liam allowed all this to happen and could have easily prevented this whole mess if he just opened…his mouth…once, rather than standing there looking like a limp sock puppet. 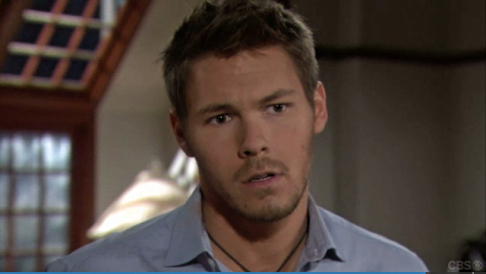 See what I mean? With the button eyes falling off and everything–just ridiculous.

Ultimately, I believe that Steffy and Liam bring the fire. To me, they deserve each other because of that positive aspect, but also in a negative way–they’re both some of the more disgusting people I’ve seen on TV, even though they’re fictitious characters. Even further, I believe that both of these half-women can do better than this half-boy, and I call them all “halves” because no self-respecting adult would do this shit. I’m just telling it like it is right now.

Steffy truly deserves someone who is going to think of her and only her, not thinking of one, then the other, like Liam does every cycle. Hope is probably only just twenty and has a long life ahead of her and she needs to focus on that rather than pressing a marriage for no real reason. Even if she were to seek a relationship, she deserves someone who will help her grow because she grew up with little to no moral compass whatsoever and really doesn’t know better. Now, I don’t want you, the reader, to take this as me making excuses for Hope because she has a fresh rump roast’s worth of blood on her hands for perpetuating this mess and then some. But the issue at hand is that people, formerly bashing Steffy two years ago for the reasons above, are now hailing her as some sort of martyr. I’m not sure what my disconnect is with everyone else, but I’m not buying it. The “Steffy” character isn’t and will never be a victim to me.

← Prev: Long Time, No Post! "The Bold and the Beautiful" -- Dr. Taylor Hayes: Victim or Hypocrite? →