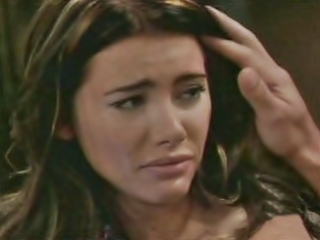 So this is my first blog on Bold and the Beautiful in quite some time as I’ve been busy writing lyrics and launching Space Shuttles. I was supposed to write this blog over a week ago, but the thoughts are still relevant—these people are a joke. Damn good thesis, huh? My old English Comp professor might say so.

Over the past two-plus weeks, I’ve lost count of how many times I rolled my eyes, shook my head or wanted to jump through the TV and physically fight somebody. We’ll start with Bill because I understand he’s supposed to be the new Stephanie, but she had her own personal reasons for doing what she did. Bill just takes micromanaging to a whole new level.

See, every boss probably has a worker that they deem their favorite. For Bill, clearly that’s Alison, and I’m not saying Justin because Bill and Justin go back long before Bill took over the family business, from what I understand. Alison has always rubbed me the wrong way as she’s all too willing to engage in stalking, blackmail and any other illegal…crap…just for an extra check. It’s like Spongebob and Mr. Crabs, except twice the stupid, believe it or not. My theory is that Alison is an insecure woman in dire need of approval and she needs to get laid. Do you get me?

On the other hand, we have the grouping of Hope, Steffy, Taylor and Brooke in which all of them are coming off as the worst people in the world. Hope is doing just as we’d expect from Brooke or Steffy, using this devastating situation to try to one-up her nemesis once and for all. But it doesn’t make me feel sorry for Steffy at all because this still could have been prevented, plus I refuse to delete stories dating back to 2010 from my memory. It doesn’t go like that. Taylor continues to cancel all of her appointments to float around Hope like Kazoo from The Flintstones as if Hope has ever listened to her (I wouldn’t either, personally), and we have Brooke regressing like the rat in Flowers for Algernon! It’s just too much!

See, these four epitomize the qualities I hate in people. I hate opportunism, I hate blatant lies and I hate a lack of accountability, but what I hate the most in people is hypocrisy. This is a recurring theme among them. The latest two shows had me loathing Steffy more than I ever could because it makes me sick to my stomach to see someone so insecure. She rambles on and on about how she’s not worried about Hope, but she insists on essentially picking a fight with her in the main office upon first sighting. Let’s find the logic in that. Three…two…one…GO. These two clowns mirror each other! Ultimately, Steffy did fall back a few pegs and came clean about her concerns that everyone is judging her. She needs to be comfortable with herself to know otherwise, but when one is in the situation that she’s in, self-guilt is inevitable.

There’s nothing more I can say about Taylor and Bill’s lack of a life and there’s nothing worth saying about Brooke’s harlotry, so I’ll bow out saying cheers to the new additions to the cast. Hope’s alone time on the Forrester roof served as the perfect segue for that. I can’t lie, I’ve really been drained because these people are the focus and their latest stories have left one of the worst tastes in my mouth, so bad that Nyquil has begun to taste like cream soda. I miss Marcus, Dayzee, Carter and Maya…

From A Millennial’s Perspective

This entry is loosely inspired by the articles of Robert Mann, found on his Wordpress site, Something Like the Truth....

From A Millennial’s Perspective

This entry is loosely inspired by the articles of Robert Mann, found on his Wordpress site, Something Like the Truth....