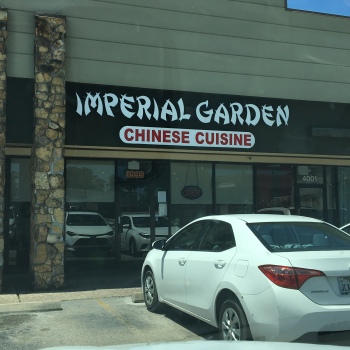 I love Chinese food, specifically Shrimp Fried Rice. It’s even been my election night tradition for the past fourteen years, usually with fried chicken wings and/or boneless spare ribs. Before moving to Houston, I was a regular at Gold Bowl, sort of a hole-in-the-wall in Baton Rouge on the corner of Airline Hwy. and Lobdell Blvd. known for their yellow rice and massive shrimp. But with life comes moving, and with moving comes the task of rummaging through your new city for some of your favorite gastronomy.

Upon moving to Houston in March, my family of six shared a one-bedroom suite on FM 1960 while our house in Spring was under construction. We frequented the nearby Panda Express, one of my favorite chains, but a scout like me wanted to taste some of the local flavors of the Bayou City. Thanks to the trusty Yelp.com app, I chose to pay a visit to Imperial Garden Chinese Cuisine for a small order of Shrimp Fried Rice.

Imperial Garden is tucked away in an unassuming strip mall on FM 1960 and Falling Creek Dr. in the Champions area, with some basic seating, a homey ambience and quite the floor space, so much so that I considered dining in. I earlier called my order in while walking the family Yorkie, and within ten minutes, it was ready for pickup. 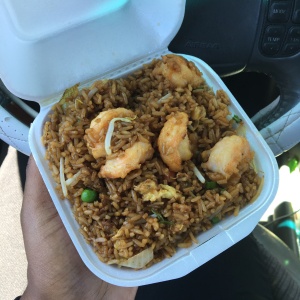 My small order of rice was quite heavy, as I opened the Styrofoam to see shrimp nearly the size of the thumb—LOTS of them—as well as other fixins’ such as peas, eggs and my favorite, bean sprouts. But then came my natural enemy: onions. You see, my aversion to onions began as a toddler, thanks to those seed-like grindings on my All-American Cheeseburger that one time. You could say that I was not lovin’ it…

Though fried rice is one of the few instances in which I can stand onions, I still prefer not to deal with them. More on that in a few. 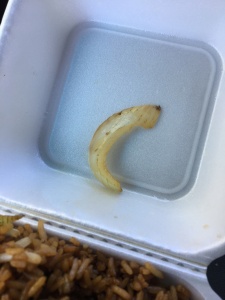 By and large, the fried rice from Imperial Garden was really good. I hate gummy ricemore than I despise chewing on onions, and their rice was right on the money. The seasoning was en pointe, and I had the right amounts of (lightly battered?) shrimp and peas in every bite. But after every few ingestions of the savory dish, up popped one of those slimy monstrosities. Here’s the twist: those oft long slices of onion provided the perfect balance to the soy sauce in the dish, giving it a certain zest; I was none bothered about removing them along the way.

Did I mention that the shrimp seemed to have a light batter?? 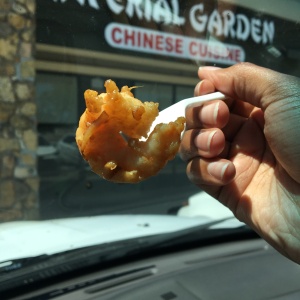 This was an unceremonious visit for me, meaning that it wasn’t something I had ever bookmarked or planned. But given my newness to Houston, as well as my need to explore the local businesses that make the area great, my visit to Imperial Garden was well worth documenting.

So ends the first entry for my brand-new This Is Houston blog series. I should note that these articles are not intended as reviews, but merely shout-outs to the people and places that have caught my attention. In effect, these posts will be a continuation of my previous series, Javan Does Baton Rouge. Still, I hope to inform and entertain you, the reader, as I begin my journey to explore the Bayou City one entry at a time.

I’m Javan Hamilton, and that was Houston.

Thank you for reading! This website serves as my portfolio for your eyes, ears and mind to indulge in. Feel free to explore this site, where you can view my body of work, as well as learn a little of the method behind the madness. Further, follow me on Facebook and Instagram, look me up on IMDb and subscribe to me on YouTube. I’m also on LinkedIn, and please message me at javanhtv@gmail.com for any inquiries.