“Today, these three players are after high stakes, but they have to avoid the Whammy as they play the most exciting game of their lives!”

This spiel gets every Press Your Luck fan riled up! As one of my favorite television shows in the world, I’ve studied PYL ever since I first saw it on the Game Show Network in 2002. The show originally ran on CBS Daytime from 1983 to 1986 as a spin-off of a short-lived game show from 1976 called Second Chance, also created by Bill Carruthers.

I spent much of my youth learning the chords to the show’s theme song (Score Productions, 1983), as well as building models of the set. I was also up to date on the downloadable games as well, especially Big John’s Press Your Luck and Press Your Luck: Expert Edition, a fully customizable PYL game. With roughly ten years of immense knowledge of the show inside and out, I used my newfound knowledge of 3D modeling to take PYL to a whole new level.

I used to model the set with old cardboard boxes, poster boards and Christmas lights in high school, I taping my own episodes with the large Sony camcorder my grandfather got me as a present in 2001. I even covered the theme song on a regular basis using my Casio keyboard, a microphone, my karaoke machine and my grandfather’s stereo.

Fast forward to 2010, I designed my current set on PowerPoint, building the Big Board out of project display boards and Christmas lights. But due to unfortunate circumstances, it was never completed and the project was ultimately scrapped. Three years later, my covers of the pulsating theme were still popular on YouTube, and my modernization of the classic set had many fans ready for more.

It started as a display board…

…with markings made for the squares and details…

…which gave me my base layer.

Straws were used as a support truss for the game spaces…

…which would house print-outs of the slides, featuring millions of dollars in cash, prizes and of course, Whammies.

The straws were hot-glued in…

…finally giving the board its shape.

The 6″ x 6″ game spaces are mounted, the lights are rigged….

The hard part was for the outlines…

…as they were to light independently from the logo and squares.

The massive logo was divided into nine prints…

…laminated with packaging tape, and adhered into one graphic…

…shining rather dimly in the middle of the Big Board. Tin foil was added later to brighten it.

The logo’s outline was crafted in plastic canvas…

…with red cellophane on one side, and bubble wrap on other other for texture.

More cellophane was hot-glued to the greater outline…

…and the logo permanently took its place on the board.

Squares. They are the basis of the show. They are what the gameplay is based on, and also they formed the shape of the classic set. Because of that, the simple shape of a square served as the basis of my entire design.

PYL taped inside Studios 33, 41 and 43 at CBS’ Television City in Los Angeles with a simple design consisting of the Big Board, the rotating contestant island and a series of panes on either side of the stage. During the pilot episode, a star field hovered behind the studio audience, replaced with the effect of blue windowpanes throughout the show’s actual run. The mood lighting on the cyc outlining the stage would also change colors: red during the intro, Big Board rounds and closing, and blue for everything in between.

The “Press Your Luck” set, blue during the second round of Q&A.

The “Press Your Luck” set, changing colors in between rounds.

The “Press Your Luck” set, red during the first Big Board round.

This and other subtle nuances were into account during the design phase. Despite what was drafted on PowerPoint, the stage played a key factor in the set’s overall design. Taking pages from Deal or No Deal, America’s Best Dance Crew, Game$how Marathon and 80s Hollywood Squares, the audience was divided into risers with a T-shaped catwalk jutting out from the main stage, causing two pits on either side for the audience to sit in.

The “Press Your Luck” set in its early stages, showing two of the five risers, plus the “mosh pit” on either side of the catwalk.

A view from inside the Big Board, showing the remaining audience risers, as well as detail from alongside the catwalk and stage.

Black served as the base color as a means of allowing the set pieces to stand out. This is why my set pieces changed colors, as opposed to the stage like the actual show. Paying tribute to the old windowpanes, I made giant panels for each riser with their own spotlights that changed colors with the rest of the set. These were also modeled after the panes lining the stage on the real PYL. Not to be left out, I took the star field concept from the pilot episode and used that as the backdrop behind the host, replacing the panes on the real stage.

(Top) Three-dimensional panes are hovering above and behind the audience risers, based on the original concept. The starfield from the pilot, however, was brought back and used as the backdrop for the host (bottom).

The contestant island was loosely based on the 2002 GSN revival, Whammy! The All New Press Your Luck. Divided into two tiers, the main tier had LCD screens that combined graphics from both PYL and Whammy!, and the bottom tier hosted the contestants’ individual scoreboards, as seen on classic PYL. The original contestant island was large and elevated, featuring a slightly smaller copy of the show’s logo seen before and after commercial breaks. 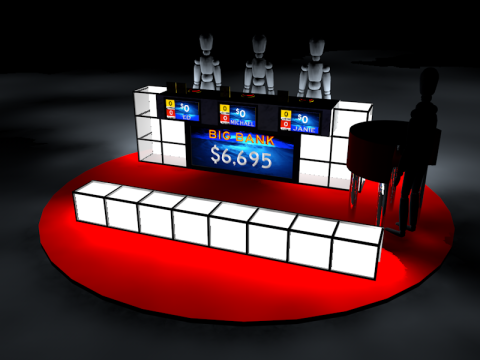 Nuances from both the 1983 and 2002 sets served as inspiration for my final design, paying homage to both generations of PYL. Also featured is the Big Bank, a collection of all the money lost from the Whammies. Originally from “Whammy!,” if the player lands on Big Bank on the board, they must correctly answer a difficult question on order to receive the total.

I integrated that into the catwalk, serving as an LCD screen that would show the same footage as the Big Board.

The basis of the show, this was exactly how my Big Board was built in my room, minus the LED panels that surround it. This CGI game board was outlined in LED strips behind red acrylic, as custom LED panels would serve as the eighteen spaces. The logo itself was displayed on a projection screen, lined with brick glass and backlit with red LEDs. On the show, the “Press Your Luck” sign was replaced with feeds from one of the cameras inside the hollow black spaces inside it (representing the buttons pressed during gameplay). Here, the cameras were behind the skeleton of the Big Board, with the projection screen alternating between the logo and the contestants at different points throughout the game.

In 2017, I started work on an updated version of the set, thanks to my increased experience with virtual set design. But due to the 2019 return of Press Your Luck on ABC, as well as limited free time, the project was scrapped. Here’s what I had been working on:

8 thoughts on “Press Your Luck”